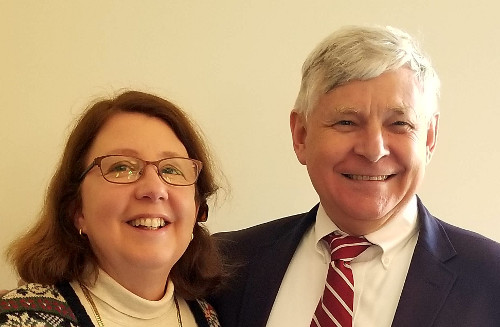 I grew up in a Christian family in which my father was a part-time minister with the Church of the Brethren. God gave me faith in Christ early in childhood and I was baptized at twelve. I began college at Virginia Polytechnic Institute, but finished at the Johns Hopkins University because of a desire to pursue Molecular Genetics. During my time at college I was introduced to systematic Bible study and was strengthened in other Christian disciplines. At Hopkins I became involved in the campus fellowship, led a Bible study, and in my senior year was president of the group.

I had been planning to go to graduate school, but during my year as president the Lord brought unprecedented blessing to the ministry. After years of slow progress, we saw our fellowship increase from 20 to 50 members. There were many other displays of God’s blessing among us and as the year drew to a close, I felt the Lord leading me into full-time ministry. I subsequently joined InterVarsity Christian Fellowship as a staff worker and was placed in Philadelphia.

Ruth also grew up in a Christian family. Her parents were involved in a wide range of ministries throughout her growing-up years. Her father was an elder of the First Presbyterian Church in Bethlehem and was a faculty member at Lehigh University until his retirement. Ruth also had sought to be obedient to the Lord from childhood. She was involved in leadership of the Lehigh Christian Fellowship at Lehigh University where she studied English literature. We were married immediately following her graduation in 1980. She worked as a bookkeeper for the North Africa Mission for one year, and since then has fully devoted herself to being a homemaker and a mother for our five boys. As time and opportunity permit, Ruth assists me in ministry.

During our time in Philadelphia, I ministered on many campuses including Temple University, Drexel University, and University of Pennsylvania. We were members of Tenth Presbyterian Church and established close ties with that and other churches in the city. It was my privilege to see ministries grow and flourish at most of the campuses where I worked. We were able to see a large number of our students significantly involved in local churches, many of whom remain involved in those churches to this day. Toward the end of my time in Philadelphia, I was given the opportunity to supervise other staff who were working in my part of the city. That was a valuable opportunity to gain skill in supervision which was to become useful later.

From 1986 to 1992 I was the Area Director for InterVarsity’s ministry in Central and Northeast Pennsylvania. This included eighteen schools, six full-time staff and three volunteer staff. As supervisor, my primary role was recruiting, training, and supervising staff. A secondary function was developing and directing area-wide student training programs, such as Proclaiming Christ’s Kingdom. Finally, I handled budgets and other office responsibilities. When I arrived, the area was struggling financially and the staff had not received much in the way of training for their work. Through constructing a comprehensive ministry development plan, training the staff to be more effective in their work with students, and developing a student training conference program called Proclaiming Christ’s Kingdom we were able to see major growth in the ministry.

During these years as Area Director I was also the campus staff for Lehigh University. I appreciated the opportunity to remain involved first-hand in campus ministry and deeply enjoyed my work with the Lehigh students.

While our ministry in Central and Northeast Pennsylvania was growing stronger by the year, I began to develop some concerns about the long-term impact a parachurch ministry can have. First is the limitation of young staff without formal training or credentials in ministry in a highly academic setting. Then there was the problem of doing the work of the church without a real church connection. Finally, there was the deterioration in the doctrinal integrity of InterVarsity. In 1992 I addressed these issues by leaving InterVarsity, joining DiscipleMakers, and beginning my studies at Westminster Theological Seminary.

I finished my Masters of Divinity degree in 1998 and returned my attentions fully to campus ministry at Lehigh University. I think that my seminary education enables me to minister much better to students and to the whole university community. I was ordained in the Presbyterian Church in America in 1999 to work in their campus ministry organization, Reformed University Fellowship. This provided me with the strength of a church connection, but did not narrow my focus in any way. Our scope was still all students, in whatever denomination or spiritual condition they find themselves. Ruth and I were excited about the ministry at Lehigh and delighted to be back on campus full-time.

God richly blessed our ministry at Lehigh. Over the next ten years the group grew to 80 participants representing all parts of campus life. Bible studies met all over campus. We developed a conference series and summer camp program. Spring break mission trips took root and service projects sprang up. Students eagerly took the lead in ministry to the campus and community. It was an exciting time!

Meanwhile RUF had grown tremendously all over the US, and staff supervision was hardly keeping up with the number of campuses and campus ministers. I approached Rod Mays, our National Coordinator, and began a discussion about moving me into a role as Area Coordinator. In June 2008, I became Area Coordinator for the Northeast and Midwest, and Scott Mitchell from Texas took the lead at Lehigh University. As RUF grew, other Area Coordinators were hired to supervise our ministries across the country more effectively and I focused on the Mid-Atlantic.

I left RUF in January 2021 and began a short-term position in March. While we consider our next field of ministry, I will be working half-time in our congregation and half-time in campus ministry.